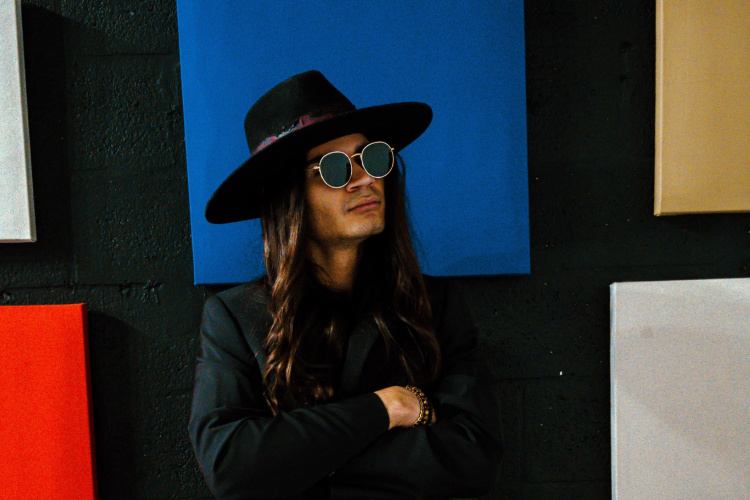 Apostoli Floyd, “Noriko Apostoli Giorgio Floyd” grew up listening to all genres of music. Mixed with Greek and Black American and being a world traveler by the age of 6, his range of cultural understanding engulfed him in all forms of art and expression.

As a kid, he always listened to traditional Greek music, soulful r&b, jazz, funk, hip-hop, and rap in his car ride to and from school. At the age of 3, Apostoli Floyd wrote his first song, which was the start of his unique love for the sounds in music. As a singer-songwriter, composer, and producer Apostoli fuses the healing sounds of smooth r&b, deep funk, modern pop & jazz, powered by the soul and feelings of blues.

Before Apostoli dove into the art of song building, he first was in musicals and plays. He learned the art of performance and harnessed his stage presence. Apostoli played the lead roles such as; JoJo in Seussical, Baloo the Bear in Jungle book, O’Malley the Alley cat in Aristocrats, Clogsworth in Beauty and the Beast and Scuttle in Little Mermaid. During that time Apostoli took piano, vocal, and guitar lessons, always playing in school and out-of-school recitals.
As an 8th-grade student, Apostoli wrote his first pop song “Trouble Trouble” with his music teacher Gaynor The Piano Queen. In those years his love and passion for music and performance grew. In his high school years, Apostoli played varsity football middle and outside linebacker, training in the early mornings and late nights. At that time musicals, lessons and recitals came to a halt. But his music didn’t stop, it evolved. Teaching himself bass guitar, violin, mandolin, bouzouki, and drums while harnessing his sound in blues. He also was teaching himself the different song structures for each genre.
As a junior in High school, Apostoli released his first single in 2018, “Cupid’s Dealer,” recorded in the award-winning studio, “The Cutting Cane,” produced by four Grammy award winner George Noriega. George Noriega even said that Apostoli has this natural soul and funk about him. and it was featured on excitementradio.com
In 2019 Apostoli wrote a pronounced alternative country rock-soul song called “Stained Boots,” It has a soft and subtle ballad feel. In search of meaning in his life, Apostoli was thrown into many obstacles. “Stained boots” is just a short story about the search for truth and the true experiences in life. The song describes a person who doesn’t have anything left except the truth.

The year is 2022 and Apostoli Floyd has brought you his single, “SUPER NOVA,” his Funkadelic symphony of stars exploding released on January 1, 2022, and his most recent single the “Dude Abides”, his modern Funk Jam of believing in yourself to take a gamble on what you want in life released April 1, 2022.

Now the stage is set for his album release this summer with a cross-genre of music. A little taste of what you will hear.